A monthly photo/writing challenge combining the love for food and travel. Share a dish based on the featured monthly prompt. The prompt could be around a particular dish, an ingredient, or a tool. October’s theme is Candy. Upcoming EAW challenges:

Reykjavik, Iceland has a lot of stunning public art, but this caught my eye because someone used a construction barrier as their canvas.

Pre-pandemic in LA, it seemed construction was going on all the time: new apartment building, new stores, reviving abandoned buildings, etc. I don’t recall seeing any art on any construction barrier — it would be nice there was. It would have made my work lunch walks more enjoyable than seeing blank eyesores. It’s like a pop-up art display or a temporary exhibit.

Since I posted photos from Reykjavik for this week’s Lens-Artist photo challenge, I thought to continue the theme this week with public art. But also it happens to be the 10th PPAC! I decided every 5th and 10th PPAC for my blog would be public art outside of Los Angeles County just to break it up.

Anyways, if you leave the Harpa Concert Hall in Reyjavik, you would find this sculpture of what looks like a boat — it’s not a Viking boat! It is however a dream boat representing “a promise of undiscovered territory, a dream of hope, progress and freedom.” Viking boats are much larger — though this boat could have been a scale representation. 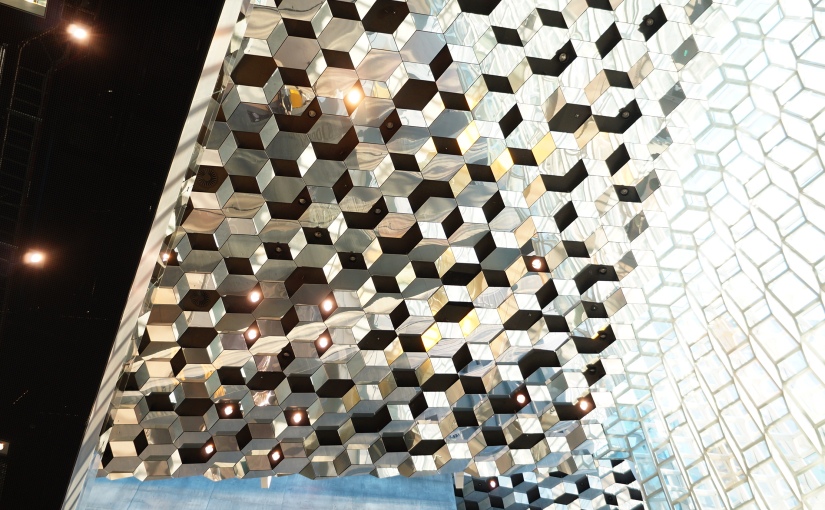 For this week’s Lens-Artists photo challenge, It’s All About the Light, I immediately thought about Reykjavik and its two main landmarks: the Hallgrimskirkja church and the Harpa Concert Hall. I love the way those buildings capture light.

Hallgrimskirkja church – at eight in the morning…on a November day.

Harpa Concert Hall later in the day when the sun was high. Looking at the above photo, there’s this cool transition where on the right side, it almost looks like a pencil drawing. Quite a cool effect. There’s no filter needed.

See you next time, Iceland.

The unusual shapes and the way the walls and ceilings capture light makes the Harpa Concert Hall in Reykjavik a fun building to take photos. One of my biggest regrets was not watching a show at the Harpa — I don’t care what show. It could have been a concert, a comedy act, play, or a ballet — I wanted to watch something at this concert hall. We went to Reykjavik in November of 2017. I told my husband I would like to return here in the spring or summer when is greener. Maybe we’ll even watch a show at the Harpa.

The Harpa when it’s dark at eight in the morning. Yes, we made a second visit to the Harpa the following morning. See how it transforms in the dark. It looks like the building transformed from clear crystals and silver to smoke and rose gold.

November in Iceland is short. The mornings are dark and the sun stays up for a few hours before setting around 4 PM. That is why I wanted to avoid saying morning and night.

Do you prefer the Harpa in the light hours or the dark hours? Comment below! 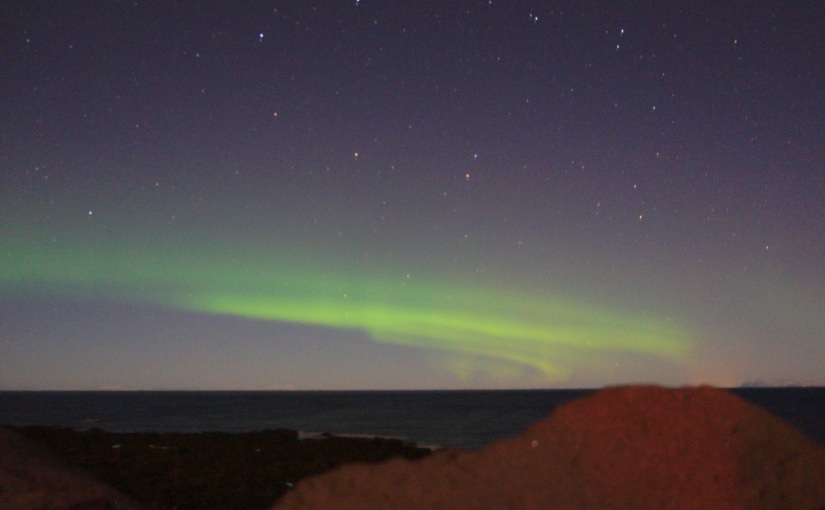 *Hint: It is mostly rainy, cloudy, and/or snowy in Iceland in November.* 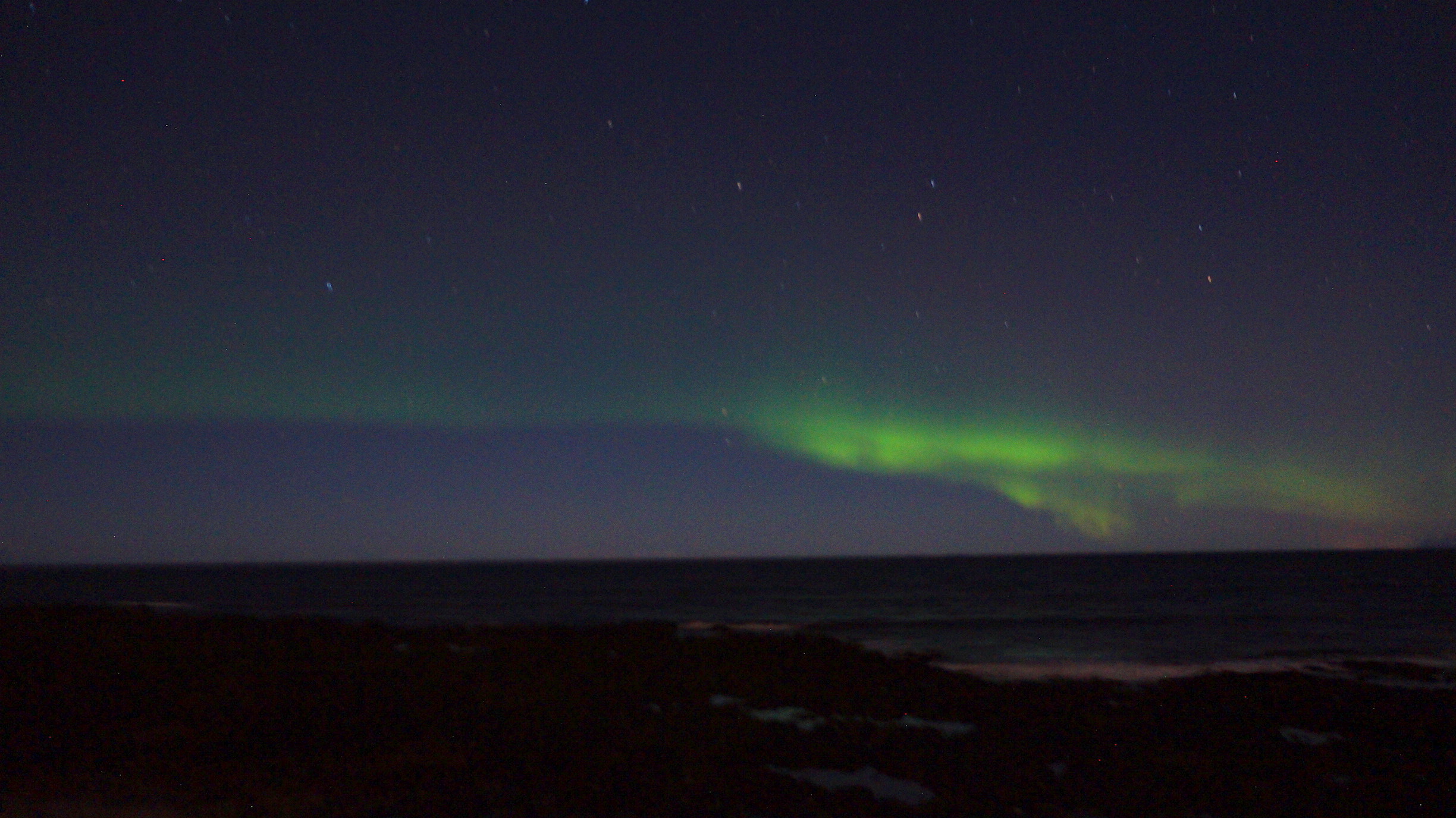 When reviewing the science of the Northern Lights, the “duh” moment hit me. Of course, it’s basically a gas in the sky. In real life, we cannot see gases like oxygen, hydrogen, or nitrogen in our air with the naked eye. I’m not sure why we expect it to appear any differently. Just like oxygen and nitrogen, your camera’s “smart focus” settings won’t be able to identify the Northern Lights as an object! 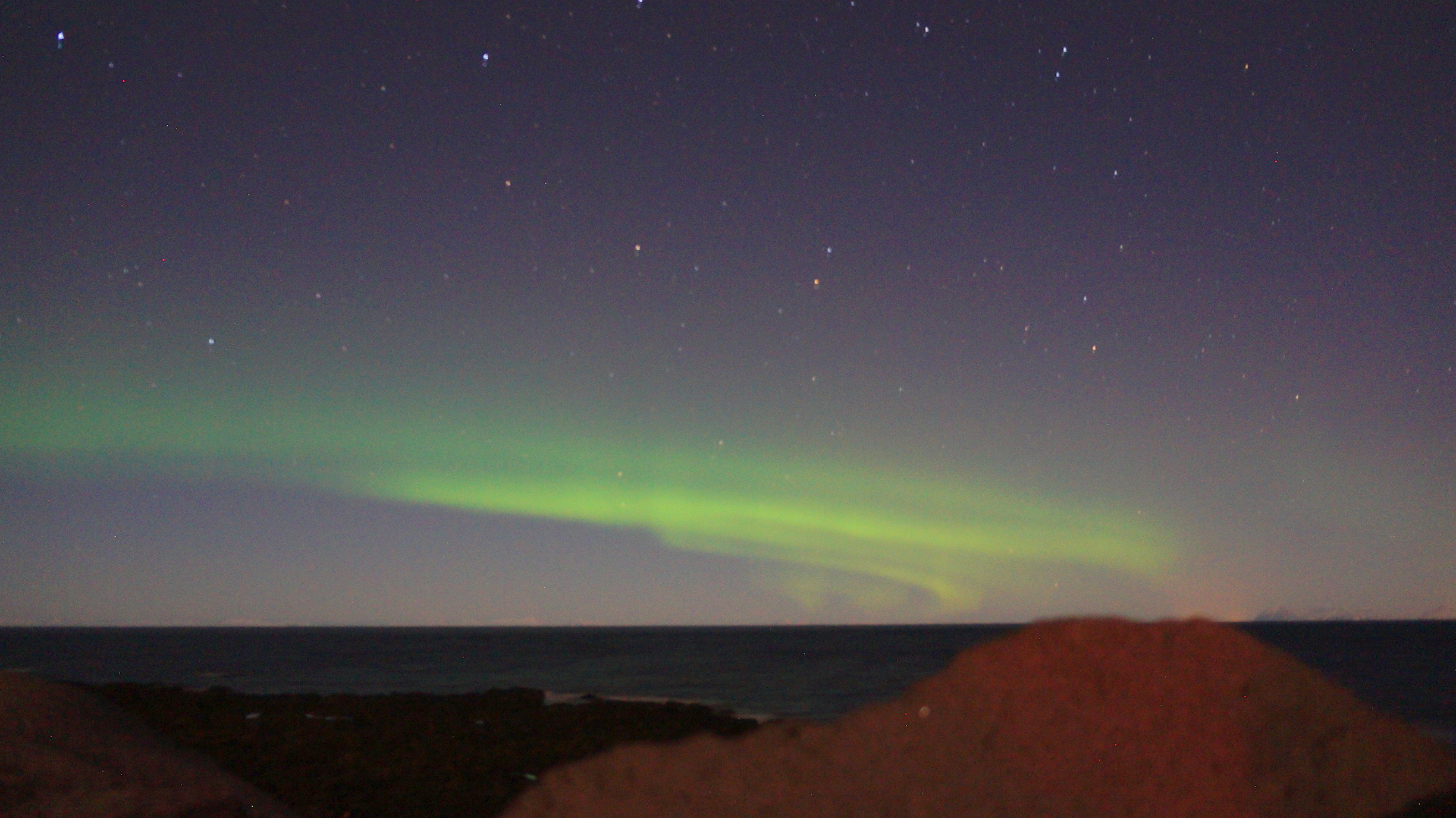 Keep your camera steady. It is important to place your camera on a tripod since it needs to stay in one place for an unusually longer period of time than a typical point a shoot. Once you figure your settings sweet spot — keep taking pictures! These only appear for as long or as little as it wants before it disappears. (Check out Petapixel “The Truth and Lies of Those Aurora Photos you see” for reference.)

The camera we use was the Sony NEX-3NL (no longer available by Sony). This is a beginner’s DSLR and it’s less than 500 dollars. We were able to take mostly acceptable photos of the Northern Lights. This is a good example of how $1000+ SLRs won’t buy you skills. The people who came with us that night had far more expensive cameras than us, they were upset and frustrated that they could not get a single clear photo of the Northern Lights. Again, this opportunity is a test of your photography skills. 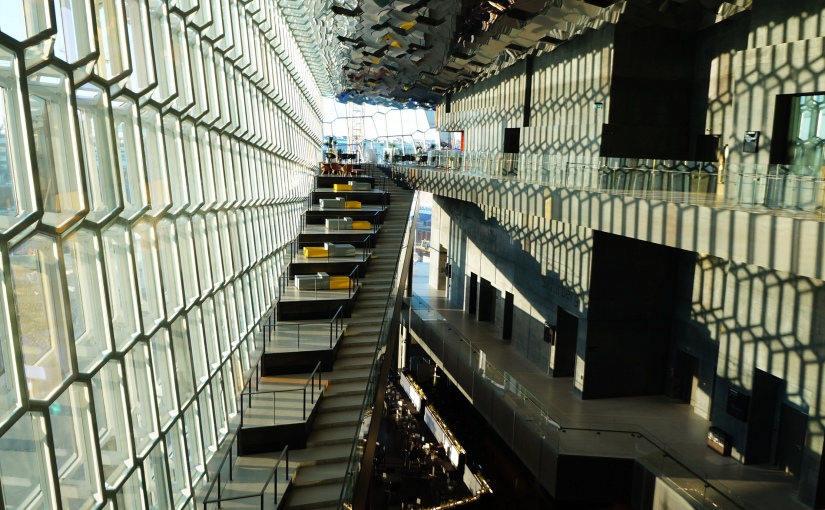 We were warned that Iceland was going to be expensive…very expensive. Our two hamburgers with minimal vegetables and one tray of fries cost near 35 U.S. dollars. We did not dare to buy another tray of fries nor bought any drinks — this would have added another 10 dollars to our meal.

So how did we “bootstrap” one of the most expensive countries in the world?

Going into the Harpa Concert Hall 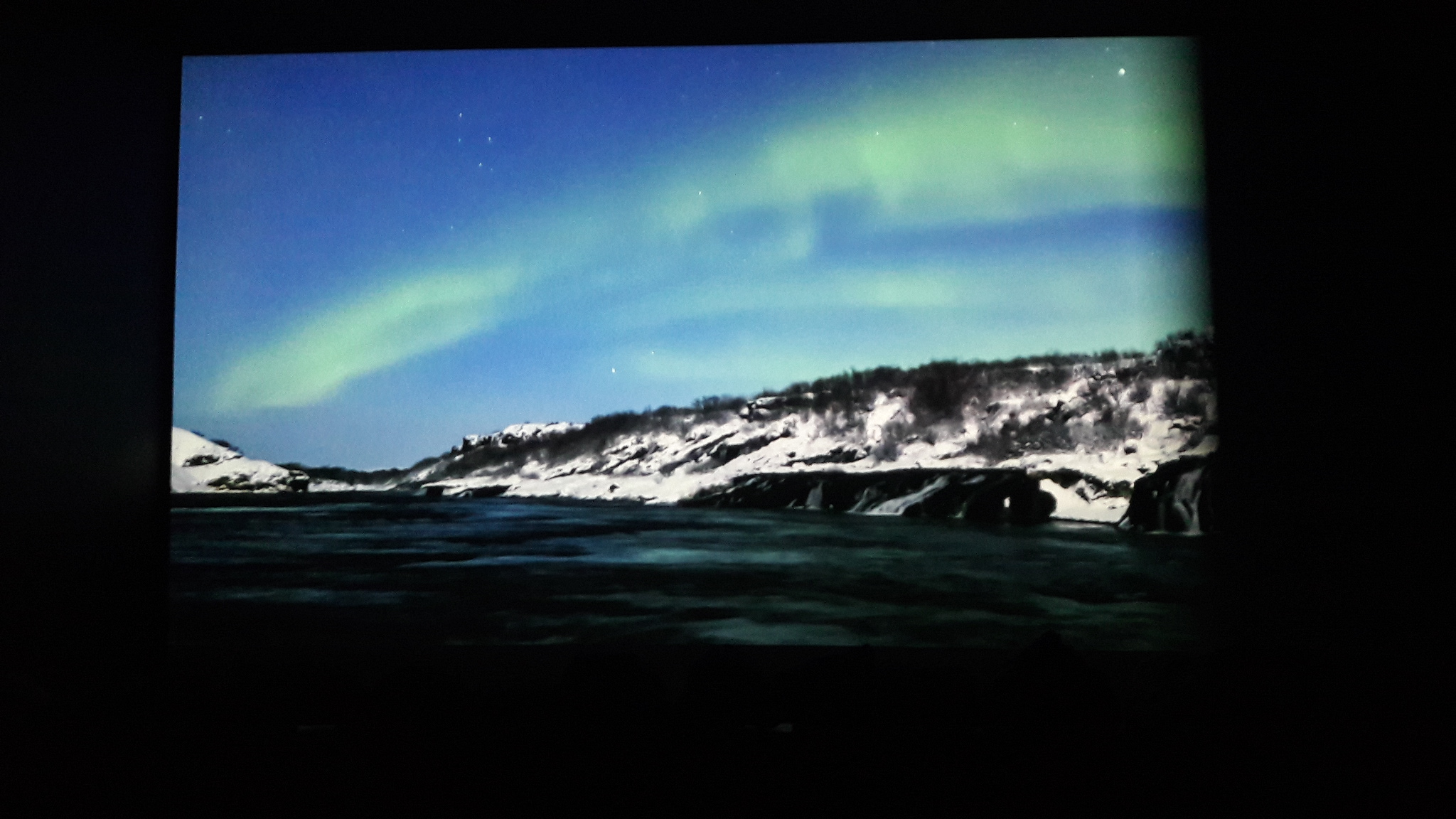 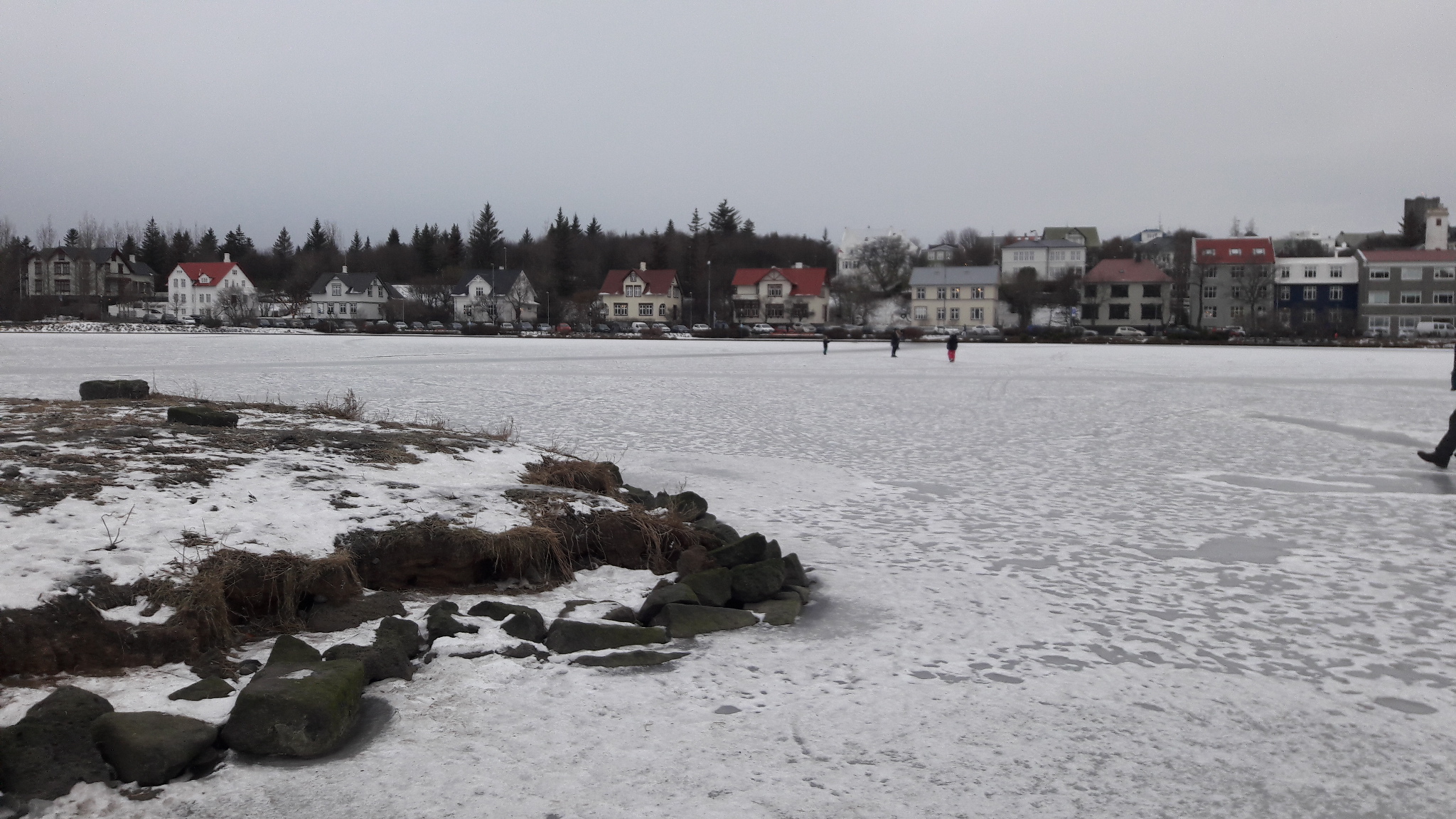 Go to the lake in the center of town. When the lake turns into ice, this turns into an instant park. I swear this really is a lake once all the snow and ice is melted. 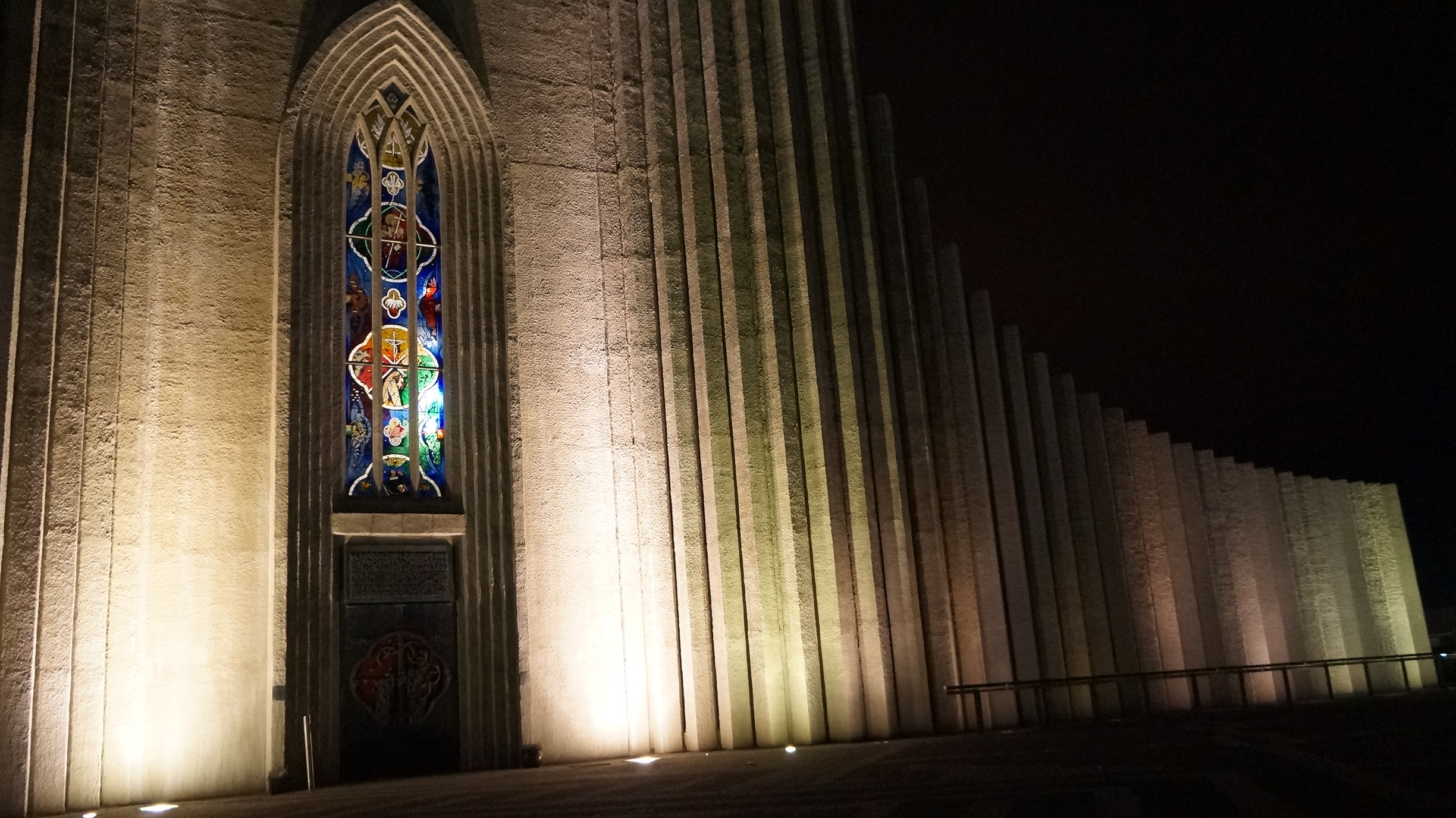 Hang around the Hallgrímskirkja Church

Admire the Christmas decorations around town

…and views from the harbor 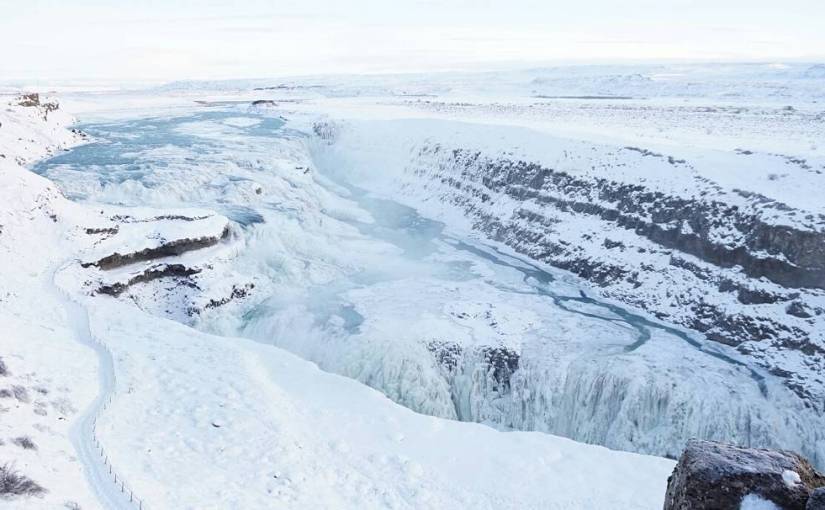 Iceland, you exceeded my expectations. You are a unique country. You have volcanoes. You have snow. You have incredible waterfalls. You pride in your nature and your geothermal energy. It was an incredible trip.

Below are a FEW photos from the trip to get LITTLE preview whilst I settle with my day-to-day, prep for grad school next month — in fact prep for the holidays, and organize my thoughts… or you can stop on by my Instagram.